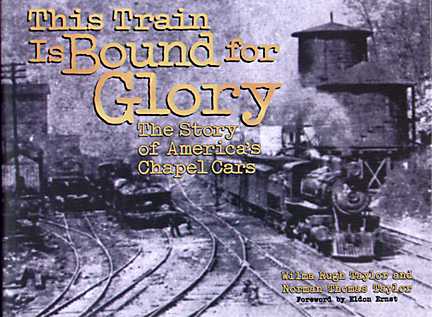 This Train Is Bound For Glory: The Story of America's Chapel Cars
By: Wilma Rugh Taylor and Norman Thomas Taylor
ISBN: 0-8170-1284-2

This book is now out of print, but you can read it online by clicking here.

This extraordinary work tells the history of thirteen "churches on wheels" commissioned by the Baptist, Episcopal, and Roman Catholic churches to travel throughout the Western United States during the half-century between the 1890s and the 1930s. This story of America's chapel cars is a must-have resource for any train, railroad, or church enthusiast. The Taylors' exhaustive resource includes spectacular photography, train logs, historical data about the towns of the train routes, and in-depth information from survivors and descendants of those who experienced the chapel cars' missions firsthand --- all providing for extraordinary glimpses into these mission-bound vehicles.

Railroad history and church history intertwine creatively in this saga of national westward expansion and settlement. Personalities and events come alive in the descriptions of developing towns and cities within diverse regional landscapes wherever chapel cars visited. This history, told here in its full parameters and in detail for the first time, is the book's explicit story.
The other story implicit in the text, one that surfaces here and there and gives added life to the historical narrative, follows the Taylors' travels along the routes of the thirteen chapel cars over their several decades of accumulated service. The Taylors followed the tracks, visited the towns, the related churches, the surviving witnesses, and their descendants; they read old newspapers, archival records, letters and journals, and local histories as well as church and railroad histories. The narration of the stories brings railroad chapel car history alive to its readers.

Chapel Cars of America, thirteen churches-on-rails that followed the railroads west from 1890 to the 1940s and brought the gospel and the sacraments to the people living along the tracks. A story of America's history, a story of the railroads, a story of amazing grace and faith. 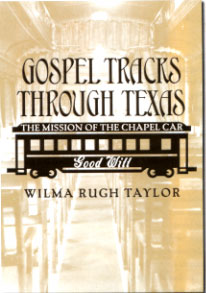 Gospel Tracks through Texas: The Mission of the Chapel Car Good Will
By: Wilma Rugh Taylor
ISBN: 1-58544-434-0


In 1895 a different kind of railroad car rolled into Texas, bringing the "good news" of the evangelical Gospel to transient railroad workers and far-flung communities alike.

A ministry to railroad men and their families lay at the heart of chapel car work, which over a period of fifty years saw thirteen rail chapel cars minister to thousands of towns, mainly west of the Mississippi. Author Wilma Rugh Taylor's portrayal of this ministry for the one car, Good Will, which served Texas, provides a view of life in towns such as Denison, Texline, Marshall, San Antonio, Laredo, Abilene, and Dalhart. The railroads that carried the Texas chapel car included the Texas & Pacific, the International & Great Northern, and the Mexican International.

Taylor writes about the travels of Good Will with fondness and an eye for detail. She describes the car itself (its living area was just nine by eighteen feet with a decorative rococo stencil on the ceiling), the missionary couples who traveled in it, and the services they held. She considers the philanthropists who supported the mobile chapel and the guilt and other motives that moved them. She looks at the issues the chapel car faced as it rolled into towns: temperance, turbulent religious rivalries, racism and immigration, the role of Masons and other lodges in rural society, and even the devastating Great Storm of 1900 in Galveston.

A novel window into Texas and railroad history, this book tells a warmly human story set on a larger stage of charitable works, evangelical fervor, and social change.

"a fine work of social, cultural and religious history. Taylor's style is almost cinenatographic it's a powerful narrative and great fun to read" - Paul C. Stone, University of Minnesota

"a fascinating read of innovative mission efforts in post-Civil War Texas a satisfying account for those interested in home mission." - A. Roy Medley, General Secretary, American Baptist Churches in the USA.